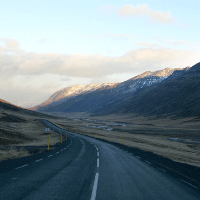 A considerable reconnaissance effort was affected here by Melmi (Fleming, 2006) in order to identify any potential gold occurrences. Of the 53 reconnaissance samples which were collected, 52 samples were at or below the detection limit of 3 ppb. One sample returned a gold assay of 22 ppb. Öxnadalur is an area with a mapped felsic central volcano that had not been explored in the previous work by Teck or by Melmi.  In 2006, Melmi conducted a program of stream sediment sampling in most of the major valleys using roads, tracks, and foot-traverses for access. Rock samples were also collected where alteration was encountered.
​​​​​​​
The historic data has been insufficient exploration to define a current resource and the Company cautions that there is a risk further exploration will not result in the delineation of a current mineral resource.

This 1017.7 km2 area is located in the north of Iceland near the town of Akureyri. Peaks in the region reach 1538m above sea level, and there are few significant tracks throughout the majority of the prospect. Due to its northern location, it is more subject to the seasonality with respect to the exploration seasons.
​​​​​​​
Öxnadalur is located in northern Iceland, where calderas contain extensive rhyolite and low temperature zeolite alteration (Corbett, 2004).
Back To Projects
HomeProjectsGold in IcelandEnvironmental PolicyAbout UsContact Us
Copyright © Iceland Resources 2021