Despite the high level of development; with respect to gold, Iceland remains relatively poorly mapped, understood or explored. Although on first inspection the geology of Iceland does not appear to match established geological models for gold exploration; lying as it does at a mid oceanic ridge, this can also be said for the majority of known deposits as a result of natural variation. This notwithstanding, gold occurrences have been noted, and appear to show similarities to the Pacific rim subduction-related low sulphidation epithermal Au-Ag mineralisation (Histed, 2010).

Iceland possesses a unique case when it comes to gold exploration. Most of the world’s epithermal gold deposits form in island-arc type subduction settings where the source of gold bearing fluids can be attributed to the partial melting of sub ducted material. Conversely, Iceland’s location, on the spreading ridge of a passively margined ocean could not be further from a subduction zone and so the same explanations cannot be applied (Histed, 2010). 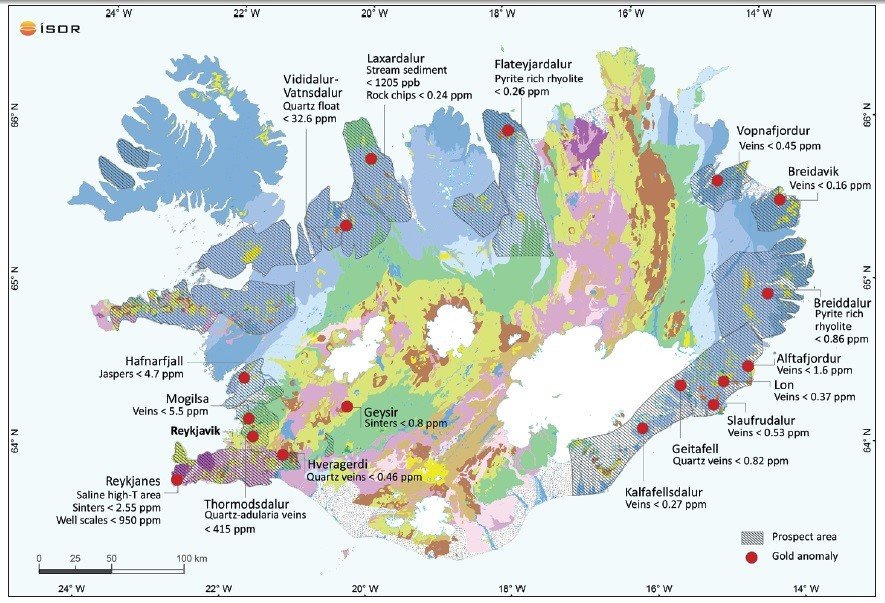 Iceland does however contain felsic intrusions amongst the many mafics. The presence of felsic melts on Iceland is indicative of partial melting, a process which can be attributed in this case to the presence of the underlying mantle plume. Inconsistent heat flow from the plume has allowed partial melting to occur in this unique setting by virtue of the fact that temperatures have locally fluctuated either side of the rocks’ solidus over time (Histed, 2010).

When partial melting does occur gold is preferentially concentrated into the new more felsic melt from the mafic protolith. The fluids expelled by the new melt are therefore more enriched in gold, and it is for this reason that targeting the areas surrounding felsic intrusions in Iceland seems a reasonable plan for gold exploration. It is also interesting to note that the Icelandic basalt itself contains almost double the gold concentration of typical mid ocean ridge basalt (Histed, 2010).

History of gold research in Iceland

The history of gold exploration in Iceland is traced back to the early twentieth century when gold bearing quartz float was first discovered in the Seljadalsá River that drains the Thormodsdalur vein system. This occurrence was investigated and exploited between 1908 and 1925 (Histed, 2010). The early prospectors were Bjorn Kristjansson, a politician and a bank manager, and Einar Benediktsson, a famous poet and Entrepreneur who found a number of gold rich locations. The most notable are in Mógilsá north of Reykjavik and in Thormodsdalur. The latter, a multiple quartz vein was explored by tunnelling and surface excavations. The exploration apparently stopped due to economic recession in Europe during and after the First World War.

No further documented exploration is known to have occurred until the 1980’s when geologic studies of volcanic hosted epithermal gold deposits suggested that many Au-Ag deposits of this class represented fossil geothermal systems. Recognition of this and keen observations by geologists working for the Orkustofnun of visible gold in cores from geothermal wells compelled the government of Iceland to create an entity to investigate these occurrences. This is the origin of Málmís hf, a government owned and operated company dedicated to the investigation of mineral occurrences throughout Iceland. Málmís utilized the geologic resources at Orkustofnun to advance this program. Málmís regional reconnaissance program in 1990 to 1993 covered most of the 13,500 square kilometers of the areas later granted under permit to Melmi (Franzson et al, 1992, Franzson 1993 and Franzson et al, 1995). Rock sampling of fossil high temperature systems associated with volcanic centers was carried out in 1991. This work was extended in 1992 by regional BLEG stream sediment and soil sampling and by rock chip sampling, with additional follow-up sampling in 1993.

Málmís sought out and found interested entities possessing sufficient experience in the exploration for mineral deposits and the ability to fund that exploration. This entity was at this time known as The Iceland Prospecting Syndicate (TIPS) later known as the Canada listed company, Iceland Gold Corporation (IGC).
​​​​​​​
This IGC-Melmi joint venture undertook exploration over that part of the island not previously owned by the Teck-Surduvik JV. Although the majority of the effort was directed towards an evaluation and study of the Thormodsdalur epithermal vein gold mineralization that was reportedly exploited in the early 20th century, an effort was made to follow up on the gold anomalism discovered during the previous stream sediment sampling effort by Málmís. This program was more focused in that it sampled second order streams within the larger areas defined by the initial sampling effort. Although the analytical methodology utilized during this program was less than optimal, the results supported continued evaluation on a number of prospects.

The Málmís reconnaissance program in the early 1990s collected 427 BLEG samples whose gold values ranged from below the detection limit of 0.1 ppb up to 30 ppb. Values exceeding 4-5 ppb were regarded as definitely anomalous. Though this number of BLEG samples equates to a sampling density of 30 km2per sample, repeat sampling and detailed work over the Mógilsá and Thormodsdalur areas lowers the regional BLEG sampling density to only 1 sample per 40km2 (Howe, 1996).  1,280 rock chip samples were collected from stream, float, altered and/or mineralized areas. Geothermal pipe scales and geyserite (sinter) deposits about geothermal springs were also sampled. Samples were and analyzed for gold, silver, arsenic, copper, mercury, lead, zinc and manganese. Some were also analyzed for molybdenum, antimony, selenium, tellurium and tungsten.

Exploration activity in the north-western quadrant of the island was undertaken in 1991 by Sudurvik hf. Selective stream sediment sampling, focused around altered felsic occurrences as possible Au sources, was done (Corbett, 2004).

Exploration continued under a joint venture between Teck Corporation of Canada and Sudurvik formed as a result of the acquisition by Teck of a number of projects most notably that of diamond concessions in the Northwest Territories of Canada owned by Sudurvik. Exploration agreements committed Teck to exploration expenditures on the Icelandic properties. In 1992 Teck completed a program of work on the Sudurvik areas in Iceland to follow up results of the Sudurvik stream silt sampling. However, once the expenditure commitments were fulfilled Teck withdrew, (Corbett, 2004).

Several companies have carried out regional scale exploration throughout Iceland. Teck Exploration Ltd. carried out extensive rock chip and stream sampling campaigns during 1992. Icelandic Gold Corporation and Orivile Pte Ltd funded exploration work in 1996-7. Starting in June 2004, Melmi ehf and Gold Island Limited carried out further mapping and geochemical sampling throughout its 14 claims across Iceland covering 15,500 km2. ISOR and their predecessors have done general geological mapping. Iceland Resources will be able to use these historical data towards its exploration plan moving forward. (Gold Prospectivity and Exploration of Iceland, 2014)
​​​​​​​
The Gold Ísland-Melmi JV, beginning in 2005 and continuing into 2006 drilled an additional 32 short core holes at Thormodsdalur totaling 2,438.95 meters.  This program improved the core recovery to a level where a high degree of confidence could be assigned to the analytical results. The results confirmed the presence of potentially ore grade gold mineralization contained within raking shoots but did not delineate a significant gold resource (Histed, 2010).