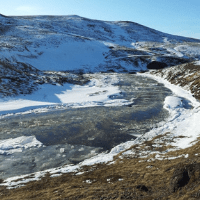 We do anticipate a lot of excitement once the drilling will commence in Thormodsdalur, time depending on the drilling license. Despite  the  high  level  of  development;  with  respect  to  gold,  Iceland  remains  relatively  poorly  mapped, understood or explored the geological and geographical settings of Iceland therefore present a unique potential for exploration.

Thormodsdalur is located about 20km E of the city centre of Reykjavík, SE of the lake Hafravatn. The project has a long history dating from 1908, where a local lawyer, a businessman and the poet Einar Benediktsson found a gold deposit that was investigated in the years 1908-1925. In 1911 with the help of a British company. And again after the first World War with  the help of a German company. They dug four tunnels and did surface excavations that covered over 400m underground. Some ore was transported to Germany and historic sources revel that reported gold values where 11-315g/t Au.

A geological study on the volcanic-hosted epithermal gold deposit suggested that many Au-Ag deposits of this class represent fossil geothermal systems that were done in the 1980’s gave new life to the project. When geologist from Orkustofnun looked at the area from the theoretical perspective and found visible gold in cores from geothermal wells. They then compelled the government to create an entity around gold in Iceland, the entity was called Málmís.

Studies in 2005-2006 and 2013  indicate that mineralisation has been identified as a low sulphidation bander epithermal chalcedony-ginguro deposit.  Petrographic analysis of the vein material identified gold occurring in its free form and also as part of an assemblage with pyrite and chalcopyrite.

Petrographic and XRD studies show an evolution of the vein system from the zeolite assemblage to quart adularia and lastly to minor calcite. In the area, 32 core wells have been drill total of 2439m. where the Au grade varies from less than 0,5ppm to the maximum of 415,4 ppm.

Iceland Resources entered into a Joint Venture agreement (JV) with Melmi ehf, Málmís hf and Gold Ísland Limited. Where Melmi is the owner of the Thormodsdalur license that was first granted in October 2004. Melmi is owned by Málmís 51% and Gold Ísland 49%.
​​​​​​​
The historic data has been insufficient exploration, to define a current resource and the Company cautions that there is a risk further exploration will not result in the delineation of a current mineral resource.

The operation will commence with the drilling of six drill holes totalling ~795m, targeting the hypothesized ore shoots 90m deeper than any previous holes. Further drilling of an additional twelve holes, totalling ~2250m, that will test the extent of the gold mineralization along strike and improve sample density in the previously drilled zone to maximize confidence in resource estimation.

​​​​​​​The drilling has been planned very precisely with carefully thought out targets in order to provide the most useful results possible. Trenching has been carried out with a focus on the main ore zone. Further trenching in the periphery of the main ore zone may identify further ore shoots or zones.