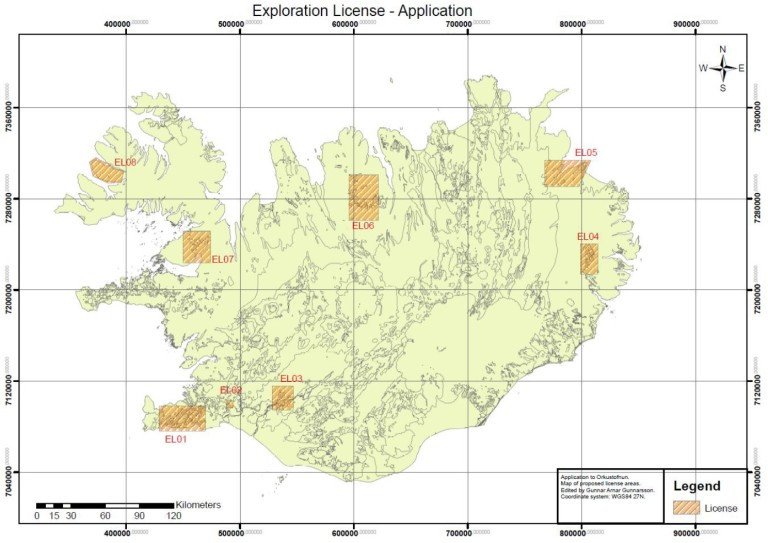 Iceland Resources is in the process of applying for other licenses around Iceland.

This 38.1km2 area is located 35km southeast of Reykjavik and is linked by highway to the south of the license and the Hveragerði townsite. Access and infrastructure to this area is therefore good.

The area has been shown to contain a 4km long north-south oriented zone of Au soil anomalies up to 2080ppb Au. The anomalous zone parallels a zone of strong argillic alteration which has overprinted a broader zone of propyllitic chlorite alteration and which is on trend with an intersection of 10m of 1.12g/t Au from a depth of 50-60m in geothermal well HS8 drilled at the Hveragerði townsite. Rock chip sampling of puritic quartz veins in the vicinity has returned values up to 0.46 g/t Au.

Grades up to 1.12g/t Au have been recovered from 50 – 60m in geothermal wells at Hveragerdi, while quartz veins have returned a high of 0.46g/t Au and soil anomalies a high of 2080ppb Au. A high potential and confidence is suggested. Quartz veins have been sampled locally and returned grades up to 1.12g/t Au. Epithermal systems are actively observed in this area and show grade in active systems. The volcanic systems locally are therefore likely enriched with respect to Au.
​​​​​​​
The historic data has been insufficient exploration to define a current resource and the Company cautions that there is a risk further exploration will not result in the delineation of a current mineral resource.

The 395.4 km2 Stóra Laxá licence lies 75 km to the east of Reykjavik. It is accessible to the South by highway 40km NE of the town of Árborg. Stóra Laxá contains basic to intermediate and rhyolite intrusions which feature chlorite and platy calcite alteration. Younger hydrothermal alteration and silica sinters are also reported by ISOR in relation to the late-Pliocene South Icelandic Seismic Zone.

​​​​​​​The region remains poorly explored. No record is available of any sampling at this location. This is likely due to the heavy surficial cover which has likely downgraded this prospect in the past.

This 406.6 km2 area is located to the East of Iceland, 5km W of the town Reyðarfjörður, highways run through the licence area. The topography is challenging with a peak of 1229m. The volume of differentiated intrusives along a NE striking crustal level structure presents a prospective environment for LSa type deposits along site where alternately striking faults intersect it.

No significant results have been recorded from historic sampling, although the sample spacing suggests that the accessibility of the area may have inhibited the sampling of more prospective areas. Stream sediment sampling does not seem to reliably reflect the adjacent gold endowment in many cases, so these results should be given low weighting when downgrading the potential.
​​​​​​​
The main lava types forming Þingmuli are olivine-tholeiite, olivine-free tholeiite, basaltic andesite and icelandite together with pitchstones and finely crystalline rhyolites. Potential high, confidence moderate.

This 672.2 km2 area is located to the west of Iceland adjacent to the Hvammsfjördur 180km from Reykjavik. The highest peak is Hafratindur at 923m above sea level. A highway runs through the south of the district.

​​​​​​​No significant Au assays have been recorded in the historical data, although the differentiated melt is of a regional type likely to show an enriched source.

This 414.5 km2 licence is located at the Arnarfjörður peninsula located 400km from Reykjavik, and centrally accessible by highway. The highest peak in the area is Kaldbakur at 998m above sea level.

In this area in NW Iceland, Suðurvík identified drainage anomalies grading to 20 ppb and local people have identified boulders of banded quartz.(Corbett,2004). Stream sediment gold anomalies to 20 ppb and the anecdotal evidence of banded quartz prompted Melmi to visit this area. Eleven samples were taken and results indicate a depressed geochemical environment. Field examination identified no significant alteration that could be attributed to hydrothermal activity. Rare silica in the form of opal filling vugs and voids locally were observed. The terrain was observed to be dominated exclusively by basalts, which were in this case sampled exclusively.

Limited evidence of Au endowment has been recorded from historic work with a high of 20ppb taken from stream sediments. This value is however significant enough to maintain the prospectivity of this area considering the depressed values in stream sediment sampling proximal to known deposits. There is clearly an enriched Au source in this licence. The potential is downgraded due to the small volume of differentiated units and lack of historical evidence, though the confidence is also low.
​​​​​​​
The historic data has been insufficient exploration to define a current resource and the Company cautions that there is a risk further exploration will not result in the delineation of a current mineral resource.
Back To Projects
HomeProjectsGold in IcelandEnvironmental PolicyAbout UsContact Us
Copyright © Iceland Resources 2021